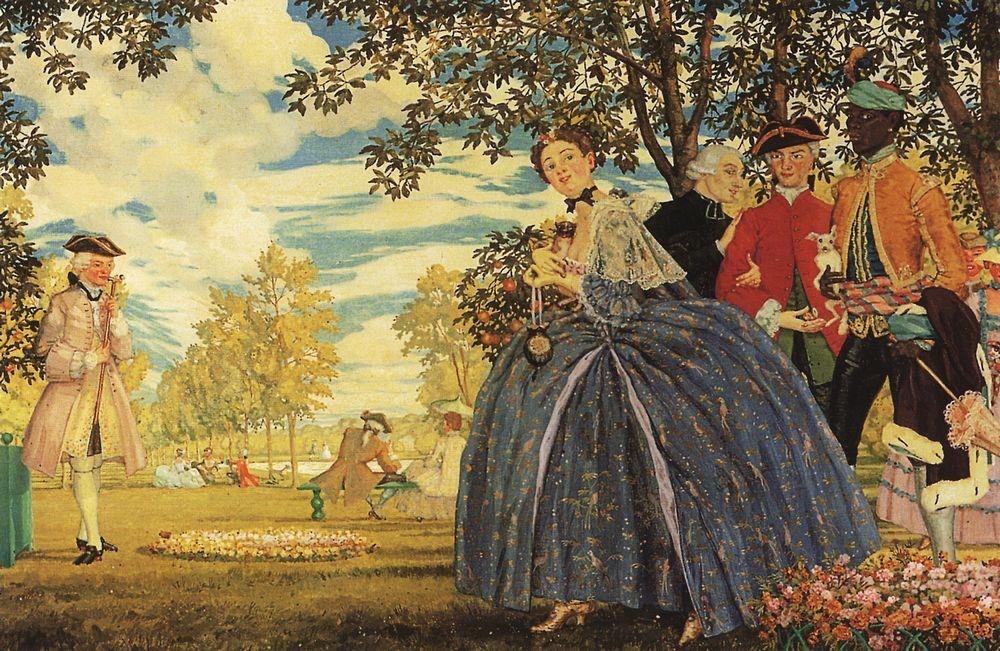 Born into a family of a major art historian and Hermitage Museum curator Andrey Ivanovich Somov, he became interested in 18th-century art and music at an early age.

Inspired by Watteau and Fragonard, he preferred to work with watercolours and gouache. For three years he worked upon his masterpiece, Lady in Blue, painted in the manner of 18th-century portraitists.

During the 1910-s, Somov executed a number of rococo harlequin scenes and illustrations to the poems by Alexander Blok. Many of his works were exhibited abroad, especially in Germany, where the first monograph on him was published in 1909.

Following the Russian Revolution, he emigrated to the United States, but found the country “absolutely alien to his art” and moved to Paris. He was buried at the Sainte-Geneviève-des-Bois Cemetery.

Somov’s painting “Russian Pastoral” (1922) at the Christie’s  auction was sold on November 29, 2006 for a record amount of 2 million 400 thousand pounds. Prior to this, not a single painting by a Russian artist was rated so highly.

This record for the value of Russian painting was broken in London at the Christie’s  auction in June 2007 – Somov’s painting “The Rainbow” was sold for 3.716 million pounds (more than $ 7.327 million) at a starting price of 400 thousand pounds (about 800 thousand dollars).