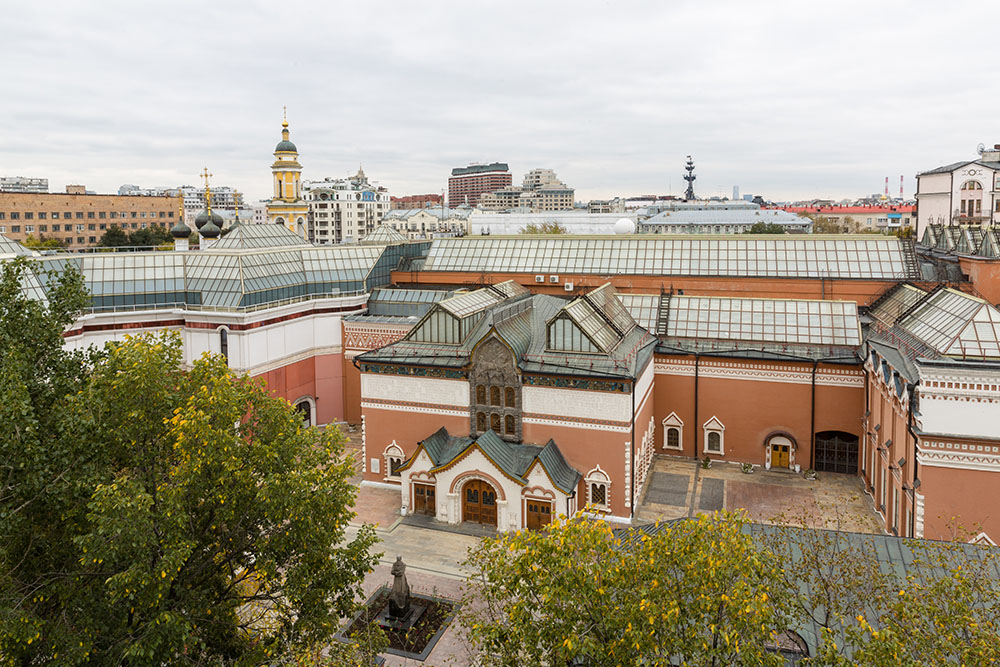 You can read the text in Serbian here:

You can read the text in Russian here:

The Tretyakov Gallery is the main museum of Russian national art, reflecting its unique contribution to world culture. This is a welcoming museum known for its rich collection and variety of ideas.

The main building of the Gallery is located in Lavrushinsky Lane, in Zamoskvorechye – a traditionally merchant district of Moscow. The Tretyakov family bought this house in late 1851. In 1856, Pavel Mikhailovich acquired the first paintings that laid the foundation for the famous collection. As the collection grew, premises specially designed for works of art were attached to the residential part of the mansion. However, the growth of the Tretyakov Gallery collection constantly exceeded its exhibition capabilities.

After the death of P. M. Tretyakov, in the rebuilt house where his family used to live, Pavel Mikhailovich’s library, a room for selling catalogs and photographs from the Gallery’s paintings, wardrobe, office and other services were placed on the ground floor.

In May 1900, at a meeting of the Gallery Council in the presence of artists V. M. Vasnetsov, V. D. Polenov and a number of Moscow architects, the idea was expressed that the gallery’s facade should be built in the “Russian style”. This work was entrusted to V. M. Vasnetsov. The erection of a new facade began in 1902 and was completed in 1904. The Vasnetsovsky facade became the emblem of the Tretyakov Gallery.

On April 2, 1913, the Moscow City Duma elected Igor Emmanuilovich Grabar, a prominent artist, architect and art historian, trustee of the Tretyakov Gallery. The main thing that marked the activities of Grabar is the reforms that turned the Tretyakov Gallery into a European-style museum with an exposition built on the chronological principle. In early December 1913, on the fifteenth anniversary of the death of the founder of the Gallery, the reformed museum was open to the public.

On June 3, 1918, a Decree was issued that declared the Tretyakov Gallery state property of the Russian Federative Soviet Republic. From this moment the museum began to be called the State Tretyakov Gallery. After nationalization, I.E. Grabar was appointed Director of the Gallery.

During the first years of Soviet power (1918–1922), the Gallery’s collection increased by almost 50% due to numerous receipts from the State Museum Fund. Due to the increase in funds, many of the exhibition halls were given as a storage room for paintings.

By 1923, the exposition, which I.E. Grabar created with such inspiration, changed a lot. Academician of architecture A.V. Shchusev, who became director in 1926, did a lot to expand the existing premises and add a new one.

The most important buildings of A.V. Shchusev:

In 1927, the Gallery received a neighboring house on Maly Tolmachevsky Lane (former Sokolikov house). After perestroika in 1928, it turned into an office building, which housed the administration of the Gallery, scientific departments, a library, a department of manuscripts, and graphic collections. This building was joined to the Gallery by a special extension. In 1928, heating and ventilation were fundamentally refitted. In 1929, the Gallery was electrified (before that it was open to visitors only in the daytime).

The building of the Church of St. Nicholas closed in 1929 in Tolmachi in 1932 was transferred to the Gallery and became a storehouse of painting and sculpture. Later it was connected to the exhibition halls by a newly built two-story building, the upper floor of which was specially designed to exhibit the painting by A. A. Ivanov “The Appearance of Christ to the People (Apparition of the Messiah)” (1837–1857).

Ivanov, Alexander Andreevich. In 1834-1835 he wrote “The Appearance of the Risen Christ to Mary Magdalene.” The painting was a great success both in Rome and in St. Petersburg, where in 1836 the artist was awarded the title of academician for it.

Encouraged by success, Ivanov set about “the Appearance of Christ to the people.” The work dragged on for twenty years (1836-1857), and only in 1858 Ivanov decided to send the painting to St. Petersburg and come there with her. The exhibition of the painting itself and all the sketches and studies relating to it was organized in one of the halls of the Academy of Arts and made a strong impression on the public.

A transition was also built between the halls located on both sides of the main staircase, which ensured a continuous view. As a result of these changes, the exposition area of ​​the museum increased and work began on creating a new concept for the placement of works.

In 1936, the construction of a new two-story building on the north side of the main building was completed. Built according to the project of architect A. V. Shchusev, masterfully correlated with the historical part and the Vasnetsovsky facade, the “Schusevsky building” organically entered the panorama of Lavrushinsky Lane. Its spacious halls (four on the upper floor and four on the lower) were first used for exhibitions, and since 1940 have been included in the main route of the exhibition.

Gallery during the war

During the Great Patriotic War (1941–1945), the Gallery suffered from bombing. On the night of August 11-12, 1941, as a result of German air raids, two high-explosive bombs fell on the building.

On the roof in several places the glass cover was destroyed. The interfloor overlap of the upper hall No. 6 and the lower No. 49 collapsed. The main entrance was damaged. The basement floor wardrobe has broken floors. The heating and ventilation systems are out of order. A few months later, on the night of November 12 to 13, 1941, another high-explosive bomb fell into the Gallery. A two-story residential building in the neighborhood was destroyed.

In 1942, the Gallery building began to be restored. By the fall, 13 halls had glazed roof and window lights, tidied up parquet, painted the walls, and fixed heating and ventilation. By 1944, out of 52 rooms, 40 were repaired, and exhibits evacuated to Novosibirsk and Perm in 1941–1942 returned to their places.

In May 1956, the 100th anniversary of the Tretyakov Gallery was widely celebrated. In connection with this anniversary in 1955-1957, the completion of the hall of A. A. Ivanov was carried out. By this time, the collection totaled more than 35,000 works of art. By the mid-1980s, the increased number of visitors, excursions, school circles was already difficult to fit in the museum. The need to expand the exhibition area has become a priority. The reconstruction of existing and the construction of new Gallery buildings in Lavrushinsky Lane is largely connected with the name of director Yu. K. Korolev (1929–1992).

Construction work began in 1983. Two years later, a depository was put into operation – a repository of works of art, where restoration workshops were also located.

In 1986, the reconstruction of the main building of the Tretyakov Gallery began (architects I.M. Vinogradsky, G.V. Astafyev, B.A. Klimov and others), based on the idea of ​​preserving the historical appearance of the building.

In 1989, a new building was erected on the south side of the main building, which housed a conference room, an information and computer center, a children’s studio and exhibition halls. In 1992–1994, an exhibition of masterpieces from the Gallery’s collection was held in them. In the same building, most of the engineering systems and services were concentrated, so it was called the Engineering Corps.

The principal feature of the reconstruction plan was the inclusion in the museum ensemble of the Church of St. Nicholas in Tolmachi (a monument of architecture of the 17th century) after its restoration and consecration. The temple was approved in the status of the house temple-museum at the Tretyakov Gallery. Construction in Lavrushinsky Lane took almost ten long years: from 1985 to 1995. People come here from different regions, regions and cities of the Russian Federation to see their favorite paintings, visit the church and pray in front of the icon of Our Lady of Vladimir. Photo Gallery:

Part three you can read here: