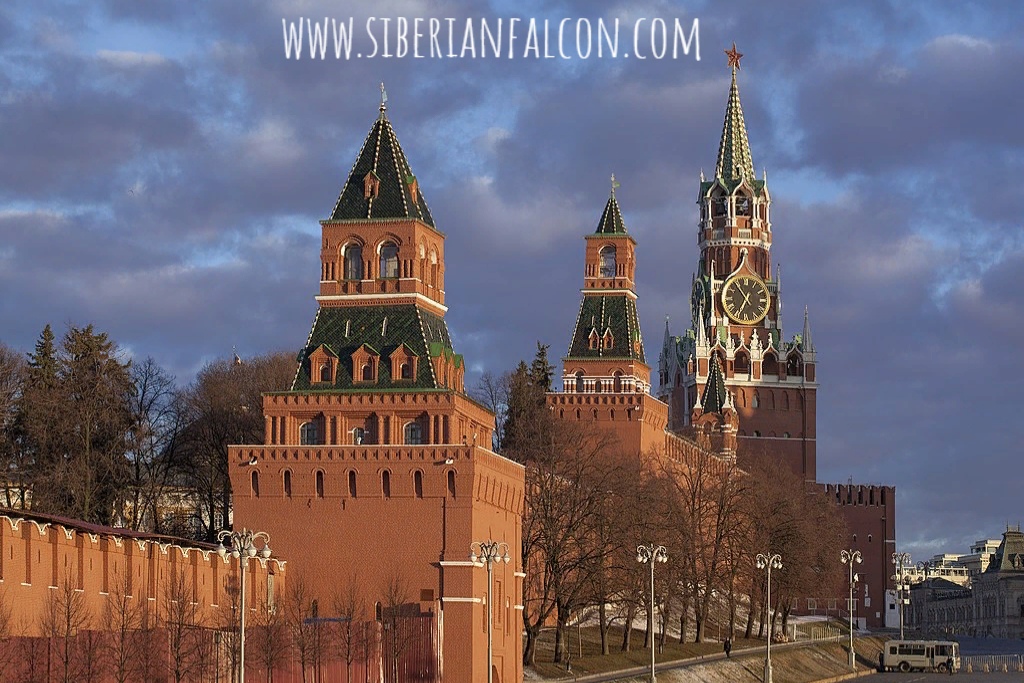 Red Square (Russian: Красная площадь) is a city square in Moscow, Russia. It separates the Kremlin, the former royal citadel and now the official residence of the President of Russia, from a historic merchant quarter known as Kitai-gorod. Red Square is often considered to be the central square of Moscow since the city’s major streets, which connect to Russia’s major highways, originate in the square. The main squares in Russian cities are frequently named Krasnaya ploshchad, or Red Square. The Russian word красная (krasnaya), or “red”, is related to the word красивая (‘krasivaya’), “beautiful”.

In Moscow, the name Red Square originally described the small area between St. Basil’s Cathedral, the Spasskaya Tower of the Kremlin, and the Lobnoye Mesto herald’s platform. Tsar Alexei Mikhailovich officially extended the name to encompass the entire square, which had previously been called Pozhar, or “burnt-out place”, because several buildings had been burned down to make room for the square.

The Cathedral of Vasily the Blessed (Russian: собор Василия Блаженного), commonly known as Saint Basil’s Cathedral, is a Christian church in Red Square in Moscow, Russia and is regarded as a symbol of the country.

It was built from 1555 to 1561 on orders from Ivan the Terrible and commemorates the capture of Kazan and Astrakhan. It was the city’s tallest building until the completion of the Ivan the Great Bell Tower in 1600. The Spasskaya Tower (Russian: Спасская башня), translated as ‘Saviour Tower’, is the main tower on the eastern wall of the Moscow Kremlin which overlooks Red Square.

The Moscow Kremlin (Russian: Московский Кремль), or simply the Kremlin, is a fortified complex in the center of Moscow, overlooking the Moskva River to the south, Saint Basil’s Cathedral and Red Square to the east, and the Alexander Garden to the west. It is the best known of the kremlins (Russian citadels) and includes five palaces, four cathedrals, and the enclosing Kremlin Wall with Kremlin towers. In addition, within this complex is the Grand Kremlin Palace that was formerly the Tsar‘s Moscow residence. The complex now serves as the official residence of the President of the Russian Federation and as a museum with 2,746,405 visitors in 2017.

The name “Kremlin” means “fortress inside a city”, and is often also used metonymically to refer to the government of the Russian Federation in a similar sense to how “White House” refers to the Executive Office of the President of the United States. It previously referred to the government of the Soviet Union (1922–1991) and its highest members (such as general secretaries, premiers, presidents, ministers, and commissars). The term “Kremlinology” refers to the study of Soviet and Russian politics.

The only sculptured monument on the square is a bronze statue of Kuzma Minin and Dmitry Pozharsky, who helped to clear Moscow from the Polish invaders in 1612, during the Time of Troubles. Nearby is the so‑called Lobnoye Mesto, a circular platform where public ceremonies used to take place.

The rich history of Red Square is reflected in paintings by Vasily Surikov, Konstantin Yuon and others.

The square was meant to serve as Moscow’s main marketplace. It was also the site of various public ceremonies and proclamations, and occasionally a coronation for Russia’s Tsars would take place. The square has been gradually built up since that point and has been used for official ceremonies by all Russian governments since it was established.

During her reign, Catherine the Great decided to make improvements to the Red Square.

In 1804, at the request of merchants, the Red Square was paved in stone. The new phase of improvement of the square began after the Napoleonic invasion and fire in 1812.

During the Soviet era, Red Square maintained its significance, becoming a focal point for the new state. Besides being the official address of the Soviet government, it was renowned as a showcase for military parades from 1919 onward. Lenin’s Mausoleum would from 1924 onward be a part of the square complex, and also as the grandstand for important dignitaries in all national celebrations.

The buildings surrounding the Square are all significant in some respect. Lenin’s Mausoleum, for example, contains the embalmed body of Vladimir Ilyich Lenin, the founder of the Soviet Union. Nearby to the South is the elaborate brightly domed Kremlin and the palaces and cathedrals of the Saint Basil’s Cathedral.

His preserved body has been on public display there since shortly after his death in 1924, with rare exceptions in wartime. Alexey Shchusev‘s diminutive but monumental granite structure incorporates some elements from ancient mausoleums, such as the Step Pyramid, the Tomb of Cyrus the Great and, to some degree, Temple of the Inscriptions.

On the Eastern side of the square is the GUM department store, and next to it the restored Kazan Cathedral. The Northern side is occupied by the State Historical Museum, whose outlines echo those of Kremlin towers. The Iberian Gate and Chapel have been rebuilt to the Northwest.

In the 1930-s, Kazan Cathedral and Iverskaya Chapel with the Resurrection Gates were demolished to make room for heavy military vehicles driving through the square (both were later rebuilt after the fall of the Soviet Union).

There were plans to demolish Moscow’s most recognized building, Saint Basil’s Cathedral, as well to make way for a larger Red Square, as well as the State Historical Museum.

Lazar Moiseyevich Kaganovich (Russian: Лазарь Моисеевич Каганович; 1893 – 1991) was a Stalinist Soviet politician and administrator and one of the main associates of Joseph Stalin. He is known for helping Stalin seize power, for his role in organizing, planning and supervising the Holodomor, and for his harsh treatment and execution of those deemed threats to Stalin’s regime. He was project manager and led the original design team of the Moscow Metro, and Moscow’s Metro was named after him until 1955. At his death in 1991, he was the last surviving Old Bolshevik. The Soviet Union itself outlived him by a mere five months before it finally disintegrated.

The legend is that Lazar Kaganovich, Stalin‘s associate and director of the Moscow reconstruction plan, prepared a special model of Red Square, in which the Saint Basil’s Cathedral could be removed, and brought it to Stalin to show how the cathedral was an obstacle for parades and traffic. But when he jerked the cathedral out of the model, Stalin objected with his rather famous quote: “Lazar! Put it back!”. However, no documented evidence exists of this encounter.

Joseph Vissarionovich Stalin (born Ioseb Besarionis dzе Djugashvili; 1878 – 1953) was a Georgian revolutionary and Soviet politician who led the Soviet Union from the mid–1920s until 1953 as the general secretary of the Communist Party of the Soviet Union (1922–1952) and premier of the Soviet Union (1941–1953). Despite initially governing the Soviet Union as part of a collective leadership, he eventually consolidated power to become the country’s de facto dictator by the 1930-s. A communist ideologically committed to the Leninist interpretation of Marxism, Stalin formalized these ideas as Marxism–Leninism, while his own policies are known as Stalinism.

Red Army soldiers cheer Joseph Stalin in Red Square in a scene from the 1942 film Moscow Strikes Back.

Kliment Yefremovich Voroshilov (Russian: Климент Ефремович Ворошилов​), popularly known as Klim Voroshilov (Russian: Клим Ворошилов, 1881 – 1969), was a prominent Soviet military officer and politician during the Stalin era. He was one of the original five Marshals of the Soviet Union (the highest military rank of the Soviet Union), along with Chief of the General Staff of the Red Army Alexander Yegorov, and three senior commanders, Vasily Blyukher, Semyon Budyonny, and Mikhail Tukhachevsky.

Two of the most significant military parades on Red Square were November 7, 1941, when the city was besieged by Germans and troops were leaving Red Square straight to the front lines, and the Victory Parade in 1945, when the banners of defeated Nazi armies were thrown at the foot of Lenin’s Mausoleum. The Soviet Union held many parades in Red Square for May Day, Victory Day, and the October Revolution, which consisted of propaganda, flags, a labour demonstration, and a troops march and show off of tanks and missiles. On Victory Day in 1945, 1965, 1985, 1990, and 2015 there were military marches and parades as well.

On May 9, 2010, to commemorate the 65th anniversary of the capitulation of Germany in 1945, the armed forces of France, the United Kingdom, and the United States marched in the Moscow Victory Day parade for the first time in history.

2008 Military parade marking the sixty-third anniversary of Victory in the Great Patriotic War.

On May 28, 1987, a West German pilot named Mathias Rust landed a Cessna F172P light aircraft at St. Basil next to Red Square, causing a major scandal in the Soviet Air Defence Forces. In 1990 the Kremlin and Red Square were among the very first sites in the USSR added to UNESCO‘s World Heritage List. Red Square has also served as a venue for high-profile concerts. Scorpions, Paul McCartney, Red Hot Chili Peppers and other celebrities performed there.

Regularly, for the New Year holidays, a skating rink is installed on Red Square.

Welcome to the wonderful world of Siberian Falcon: